Firstly I would like to say thank you to you all for your continued support over the last year!

It has certainly been a busy year with lots of events, new and exclusive brews, new customers, VIP brewers and new members joining the team...in particular Brewery Dog and our first Brewery baby, Daphne, who arrived in November! 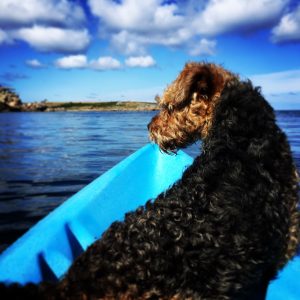 The year started colder than I have ever experienced Scilly with a good covering of snow in February and into March. We were not actually brewing at the time due to Bender, our bottling machine, awaiting a new pump from Ireland but I was out flower picking until the snow got a little too much and covered most of the Narcissi!

Ned and I have done over 30 brew days this year which included 2 exclusive brews for Karma St Martins and 1 exclusive brew for Juliet's Garden. we have also introduced Nancy and Minniehaha into the Wrecked on Scilly Range; Nancy a darker, sweet, hoppy bitter and Minniehaha a strong pale ale with some Citra hops thrown in for good measure! Both brews were showcased at the CAMRA Kernow Falmouth Beer Festival in October and received well so watch out for these in 2019.

In May, Ales of Scilly sponsored the Emma Louise girls at the World Pilot Gog Championships and saw them get to 38th in the WORLD! Even though the weather closed in and organisers had to cancel one of the heats it was still a great weekend for everyone and our ales - Scuppered Too and Giggle ale - went down a storm with the rowers!

We popped up on the mainland at a few events including Newquay Gig Clubs Men's Nationals weekend where we supplied an extra special ale in memory of rower Paul Summers. This ale also made it to the Newquay Beer Festival. The Falmouth Street Food and Craft Ale Festival had a cask of Nancy on their vegan bar run by our friends at The Beer Man.

Vegan has definitely been a buzz word for 2018 and we have made sure that all our standard ales are vegan friendly (unless specifically requested otherwise) and to support our vegan ales we hosted a pop up vegan night in the brewery in October to celebrate the end of the season. This was a bit of a trial for us and is something that we will be looking to do a lot more in 2019 so watch this space for special Scilly Brewery events in the new year!

We would like to wish you all a happy and healthy 2019 and a stress free Christmas.

Lot's of love, from us all at the Scilly Brewery.